Wonder Woman and the War against Terror 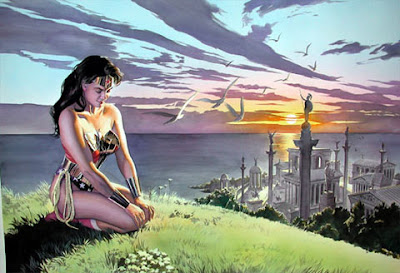 For example, my take on how Wonder Woman would see the "War on Terror" ...

"When I first came to Patriarch's World, I immersed myself in the literature of your culture. I learned a great deal about the world in this way. Your stories, especially, reflect certain unspoken truths and things that you take for granted.

"There are things within those tales that have not changed since the time of Ancient Greece. Certain myths remain inviolate.

"No matter what the culture, there is always the story of Prometheus, or Daedalus, or Frankenstein. A great mind with a fanatical purity of intention creates a monster. The creator both hunts and is hunted by his creation, until at last they meet and the maker discovers that he was the monster all along.

"America claims that it wishes to eradicate all terror from the world, as if that were a possible thing to do without eradicating all of humanity.

"Still, it sounds like a noble cause, but twisted by America's own hypocrisy. The monsters that it seeks to destroy are monsters of its own creation, with weapons forged in the furnace of America's own wars of propoganda.

"Worse, to the rest of the world, it seems that the cure might be more disastrous than the disease. Shall they willingly trade terror for oppression? Does America now ask them to hand over their lives and freedoms to a nation whose over-riding philosophy is perceived to be one of profit at all cost to humanity?

"This so-called war on terror reeks not only of hypocrisy, but also of opportunism. I cannot support it, and should America come to the shores of Themyscira seeking to make us peaceful and profitable, America will have found an enemy in the Amazons."

That's not exactly how I see it, mind you ... but that's how I imagine Diana would see it. But how the hell do you write something like that in today's climate? Hell, I don't feel entirely safe putting it on a message board.