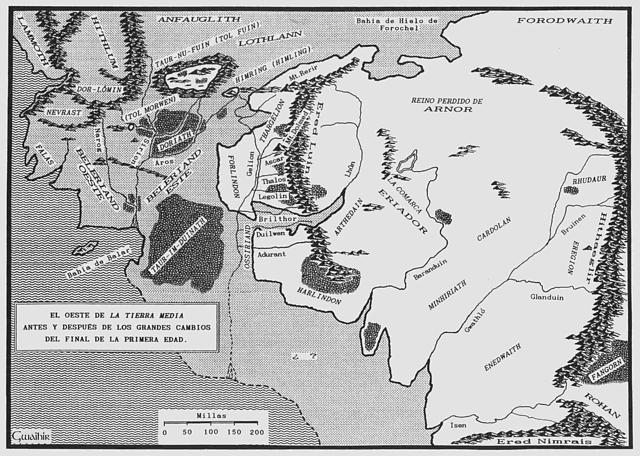 I's clear that Tolkien wanted to represent an alternative to europe's history. If you look carefully on a map of Europe, you can see around Britain and NW France there's a lowered sea-level. That should have been Eriador. The Shire and Bree were in England. Maybe Bree represents Sheffield. In Ireland, the Grey Havens must have been Limerick. Amon Sul aproches the Lockness Lake and severn the Branoywine river.
The same raised lowered-level is between Scandinavia and the Baltic Sea, Germany and Dennmark. Hithaeglir is Scandinavia. The best place for Rivendell is the the town of Trondheim in Norway, Moria and The Kazah-Dum could have been the border between what was in Norway and Sweeden. Lorien resembles Stockholm. Mirkwood is all of Finland and a part of The Baltic Sea, precisely the Botnic Gulf. If this is all true, then Dol Guldur should have been somewhere on Gotland Island, but 10000-11000 years ago that place was land, raised above the sea level, or should I say that the sea was below the land's level.
Fangorn is probably Dennmark and The Tower of Isengard coresponds Hamburg.
The shores of Iberia, in the south-west, should have been bigger, look closely to Portugal's western coast, in the line of Lisbon you can see a sharped corner of raised level of ground, but still under the water. Well the river of Tajo deverses into the Ocean through Lisbon, back then it was the Lefna(or something like this) River. The river of Ringlo has it's source in the white mountains in middle-earth, well in modern europe is the Guadaliqivir river, see the resemblance ? Do you know how the Mediterana formed ? Africa pushes to north. Back then it was farther to the south, so, the space between Gibraltar and Rabat was water, but the rest of the Mediteranian Sea was land, even if it contradicts waht I've said before about Africa, but back then, the water level was'nt so high because of pollution and so, the raised levels of ground in the Mediteranian was actually south of Mordor, Haradwaith, and souther in the Sahara. So, the Havens of Umbar is Rabat and Umbar represents the eastern part of Northen Africa.
In those days, Italy was further to the East, and so was Greece, actually they were liked, and that explains the short distance between Belfalas and Mordor. The Apenins were the mountains guarding Mordor on Ithilion's side. The Alps, that didn't existed back then were some hills in Rohan, that Should've been Germany. The White mountains should have been the Iberic Mountains, and the prehistorical mountains range must have liked the Pirinies with the Scandinavians at the gap of Rohan.
Now, the Tevere river must have been Ithilien that was going pass or through Mina Tirith and Osgiliath, now, Rome, or waht was there before Rome was Constructed, old Latin settlements. Gondor was the space between Spain and Italy.
The land of Sauron, Mordor, was The Adriatic Sea, Between the Apenins, the Dinaric Mountains and Tha Balcans. You might be tempted to say that the Mountain of Doom was Vezuvius or Etna but it wasn't. It was the Gargano Mountain in S-E of Italy. The Gorgoroth plain was a gap, a deeper sea level in our times that was back then a plain, look carefully at the Adriatic Sea and at the middle of it you will see a gap 268 metres deep. Baradur was somewhere in the sea, maibe the town of Dubrovnik, judging that The Blacans where much closer to Italy than now. The sea of Nurn was for sure the Korinth Gulf and the Pind Mountains where hills that ended the teritorries of Mordor. Bulgaria, in my opinion was half in eastern Mordor and Half in The Brown Lands. Rhovanion extended throurgh Poland, Ukraine and Belarus and Turkey must have been the far east of Karadwith.
Romania, wich I am from, and very proud, must have been The Eastern part of the Brown Lands and far to the East, where maps of Middle-Earth don't reach, maibe a Civilsation far greater than the Rohans or the Gondoriens. The sea of Rhun should've been the Panonica Sea, the Tisa plain today, in Hungary and Western Romania, wich was also called the panonian plain, after the name of a greta sea that was there when the ground level raised above the sea level.
This short representation of Middle Earth, if it's true, and the old times have been forgotten, and perhaps there were civilisation in those places and misterios creatures, besides humans, like elves and dwarfs, those that old legends of Europe speak of, then that means that the human species has been here for a long long time, not just for 13 -14 thousand years.... I'm sure you'll find more resemblances between the places in middle earth and modern Europe, I just provided you the facts and the primary links that cand be seen on a map....
If you have an opinion abouT what I have said please make a post, I hope I answered the question "Did Middle Earth ever existed ?", if not entirely, maibe partially... I want your opinions about my presentation, what doy you think ?