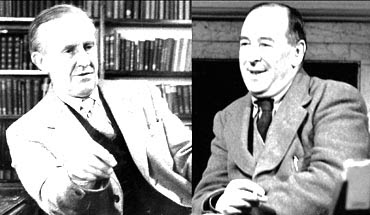 To a correspondent who thought he saw great similarities between the creative writings of Lewis and Tolkien and wondered about mutual influences, Lewis wrote, "I don't think Tolkien influenced me, and I am certain I didn't influence him. That is, I didn't influence what he wrote. My continued encouragement, carried to the point of nagging, influenced him very much to write at all with that gravity and at that length. In other words, I acted as a midwife, not as a father. The similarities between his work and mine are due, I think (a) To nature—temperament, (b) To common sources. We are both soaked in Norse mythology, Geo.MacDonald's fairytales, Homer, Beowulf, and medieval romance. Also, of course, we are both Christians (he, as R.C.)."56

I don't think so!

Although Tolkien spoke to me warmly of his long and happy association with Lewis, he also sometimes found fault with him. He mentioned that Lewis "borrowed" from him. I pointed out that Lewis had acknowledged the borrowing of the word "Númenor," but Tolkien insisted there were unacknowledged "echoes" in Lewis. In a letter toJared C. Lobdell, Tolkien mentioned eldil as one example,also Tinidril as a composite of his Idril and Tinúviel.

It is inevitable that any three writers in close friendship who have read their works to each other, and read them open to criticism and suggestions for improvement,should have an influence on each other. What that influence amounted to is quite another matter. Lewis several times warned that the more specific the claim the more likely it was to be wrong. Our intention here has been simplyto identify the nature of the friendship.