One of my very earliest memories as a child is of watching one of the Superman cartoons created by Max Fleischer. In particular, a scene where Superman puts his cape around Lois Lane to protect her from an incoming tide of molten metal. I imprinted on that image like a baby duck, and a lot of what I laughingly call my personality was formed in that moment (which is why a cel-recreation of that image is one of the first things you see upon entering my home, before you get to the row of wall after wall covered with artwork by Alex Ross, Curt Swan and others, as well as just about every bit of Superman memorabilia ever produced).

As a kid growing up in the mean streets of New Jersey, Superman was an icon for me. It was a tough life: we moved about 21 times in my first 17 years, we didn’t have much money, and every day was a struggle. When I told grown-ups that I was going to be a writer someday, nobody listened, nobody thought I had a chance, because as far as teachers were concerned, kids like me who came from nowhere and nothing were dead-enders, destined to end up working at the gas station at best or in jail at worst. Writers were supposesd to be Ivory Tower guys with leather patches on the elbows of their smoking jackets, who went to the right schools and came from the right families. I lived in the world of No, a place populated by bullies and street fights and tenements, with no possibility of escape.

But Superman…see, Superman could do anything. If there was someplace he didn’t want to be, he could just fly away. And he couldn’t be hurt, which to a kid who got beat up pretty regularly in fights and elsewhere was a pretty attractive idea. Superman taught me the morals and ethics I draw up on to this day: to play fair, not to lie, and to be willing to put yourself between harm and those you care about.

If Superman could do anything, then maybe I had a chance. Maybe I could become a writer. Maybe I could even learn to fly. That symbol, the S, became a badge for me, and growing up I always made sure I had it somewhere on me, like a shaman’s charm. That may sound silly, and from a grown-up perspective it probably is silly, but as Henry Kissinger once said, it has the added benefit of being true. And it helped me get through the hard times, which is why I continue that practice to this day…right now it’s on a key-chain in my pocket.

For me, and I suspect for a lot of people, that symbol stands for the belief in our own potentiality, in what we think we can do, and try, and aspire to. I was watching the news recently, and they were showing Palistinian protests, followed by a story on the night life scene in LA, and later on, a live report from London about somethingorother…and in the background of each of those stories there was somebody wearing a Superman t-shirt or cap. It’s universal.

And there’s a reason for that, a secret no one knows, but I’ll tell you, because of how long I’ve known you, and our longstanding friendship.

And the secret is this:

The Superman symbol is Kryptonian for No Limits.

And whether or not you speak Kryptonian (or Kryptonese), you know that…you know that deep inside, where even the cynicism of the world cannot reach.

I’ve told this story before in other places, so at risk of being redundant…back a few years ago, I was at the Chicago Comic Con when a guy in his 20s grabbed a bunch of expensive stuff off a table in the dealer’s room and made a run for it. The ownere ran after him down the aisle, yelling “stop him!” As he came in my direction, everybody parted like the Red Sea.

I brought him down like a gazelle, and we held him untnil the police showed up.

Afterward, one of the con organizers said to me, “Why’d you do that? He’s a big guy, you could’ve gotten hurt.”

And I pointed to where I’d been standing when it happened: right in front of a ten-foot-tall cutout of Superman. “How could I stand in front of that, in front of him,” I said, “and do nothing?”

As Superman has been for me, so Wonder Woman has been for a lot of women readers, so the chance to dive into that character is something I’m eagerly anticipating. This is a strong, mythic, powerful character who for some time now has been kind of drowning under the weight of her own mythos, so I’m looking forward to paring away some of the layers of debris and undergrowth that have piled up around her in order to get to the core of the character.

Coming from the world of TV and film, the first rule you learn is to service the main character more than anything else, so I’ll be writing with an eye firmly fixed on that rule.

As part of that process, we’re going to be looking more closely at how Wonder Woman appears, and functions, and her role in the DCU…and what we have planned will, we hope, come across as dynamic and powerful as she deserves to be.


Similarly, we plan to bring Superman back to his roots, to really explore who he is…how he sees us, and how we see him, in a much more personal way than we’ve seen in a while. This is part of a larger effort that will have national ramifications, but I can’t say much more about it than that for now. Keep an eye on this website for more information when the time is right…but for now, let’s just say that Superman may be a lot closer in proximity to you, the reader, than you ever guessed.

To kick off both efforts by appearing in the anniversary issues of these two characters is a great opportunity, and a good jumping-on point for readers.

If there’s any other message in this to readers, it’s in these two characters as icons of hope, that it doesn’t make any difference where you come from, or where you went to school, or who you are, there’s hope. That a kid from Jersey with Superman as the icon that kept him alive for years would one day end up writing the character is as absoutely unlikely as it is utterly inevitable. And if that’s true for me, it’s true for you, if you follow your dreams and your passions in full flight.

No Limits. It’s never too late to learn to fly. 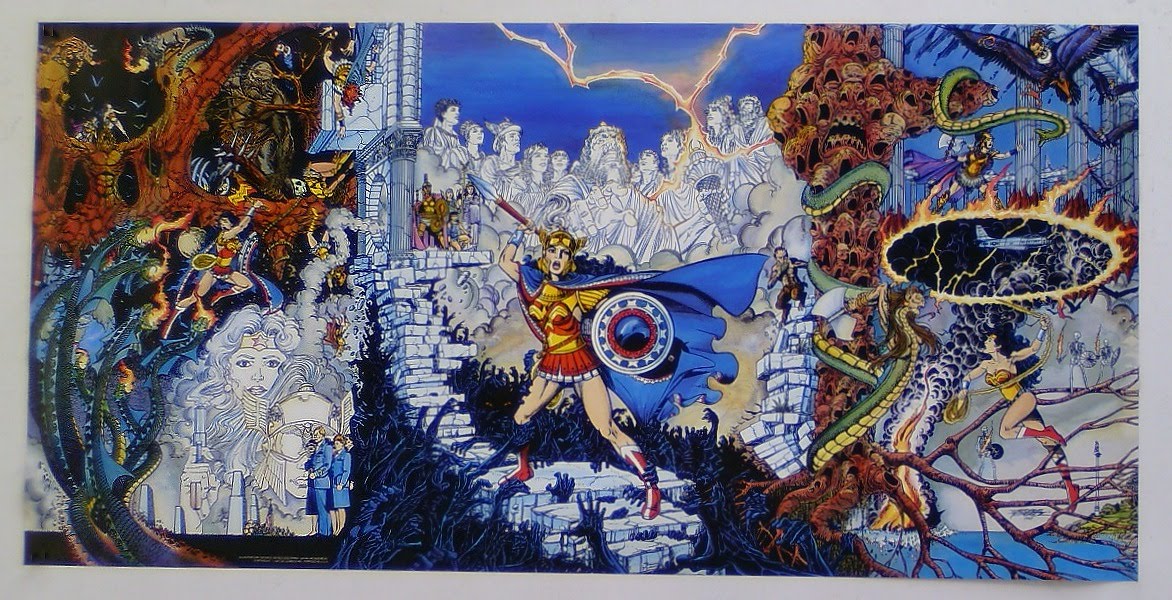